A trigraph in C is formed of three characters, the first two characters are interrogation marks ??, and the last character is just a regular character.

So, on a keyboard that does not have these 9 characters, or have other characters defined at their places, trigraphs can be used as a way for inputing these characters. 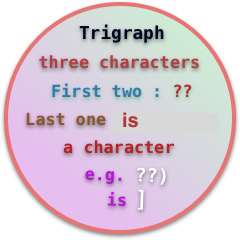 There are nine trigraphs in C , and they are:

Trigraphs can be used anywhere in a C source file, so they can be used in strings, and characters literals, and they can also be used in the C source code. Trigraph replacement is done early on in the compilation process, so it is done before preprocessing.

gcc can be used to compile a C source file, that contains trigraphs, by using this command:

What follows is another example of using trigraphs, and how to escape a trigraph.